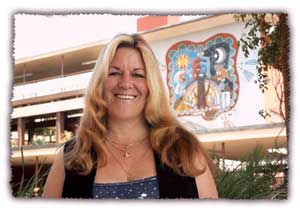 I finally learned to support myself. I bought a car. I learned how to get by without welfare."

Cee Cee had everything going against her as she was preparing to go to college five years ago, more than 25 years after high school.

She was a single parent on welfare, a former drug addict who had graduated from a residential drug facility only weeks before her first class and had lost everything in an apartment fire.

All she wanted to know was how to turn her computer on, but what Cee Cee Carini ended up learning is knowledge she will use for a lifetime.

"I knew that my kids would be using computers in school, and I wanted to be able to help them," Cee Cee says. Cee Cee learned how to use a computer, and then some.

She took buses and trolleys five times a week from Chula Vista to City College, utilizing the district's New Horizons, EOPS and CalWORKs programs. She has since earned two associate degrees –– in business management and microcomputer applications –– has more than 120 units completed, is owner of a GPA of 3.92, graduated with high honors and continues to take classes.

Then just when things were going so well, Cee Cee faced one more crisis: she was diagnosed with cervical cancer.

"I received treatment, and got through it," Cee Cee says. "I was far enough ahead in my classes that I didn't lose any ground."

Cee Cee has served as a tutor, has been an instructional assistant and for the past two years has worked with the Distance Education program and Independent Learning Center at City College. And she is more than qualified, and delighted, to help her children with computer skills.

"I see others who are scared, lost and don't think they can do it," Cee Cee says. "I can relate, and I tell them my own experiences. I tell them they can do what I did."