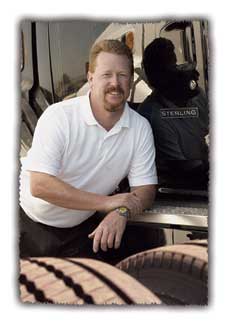 "Cooking and diesel engines: It's all about grease, right?"

From the frying pan into the diesel-fueled big-rig business, Curt Bogert has long been fired up by the prospect of making and fixing things.

Curt is the district service manager for the Sterling Company, a Lake Elsinore-based trucking fleet supplier. There was a time, though, when Curt could be found turning over hamburgers instead of handling huge-contract business deals.

"I was fresh out of high school and wanted to be an owner-operator truck driver," Curt says. "But I found out nobody hires 18-year-old truck drivers. So I figured I had better learn how to fix them."

At the same time, Curt worked as a civilian cook at Miramar Naval Air Station.

"I liked cooking, but it wasn't what I wanted to do with my life," Curt says. "My dad was in the military, so the surroundings were familiar to me. But I was ready for a career change."

Curt's father had been an aircraft mechanic, so Curt had a natural interest in machine tinkering. After becoming certified through the diesel program, he left his job cooking and went to work as an apprentice machinist for Hawthorne, staying there from 1978 to 1984.

Curt advanced to truck shop foreman, became a service manager for Ford's heavy truck division for 14 years, then landed at Sterling in 1998.

"Things have changed," Curt says. "We never had computers to help us fix six-diesel engines. I still have notebooks from my days at City College, and I refer to them often. The business may have changed, but the theories are the same. I still keep in touch with the program, and try to help out when I can."