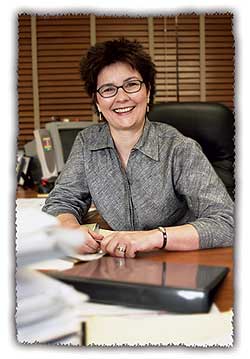 "Our biggest challenge is changing our own conceptions of ourselves. "

Dianne Peacock grew up in a culture that didn't expect women to do much of anything important, least of all go to college and find success in a career.

"I was raised with very limited resources, living in a sort of Victorian culture where men were men and women were not to be a part of much," says Dianne of her native Rhodesia.

Dianne immigrated to the United States via South Africa in 1989, and arrived as a single mother with two teenage children. When in a public library she picked up a book on math, a subject she'd been told women couldn't grasp. I can do this, she thought, and began teaching herself math.

"I was trying to figure out a way to put my children through college," Dianne says. "While researching how that would happen, I realized how much I wanted to go myself."

Dianne enrolled at City College where she became a student of the Honors Program. "College was a life-saver for me," she says. "I had part-time jobs and as many classes as possible, and I was perfectly happy."

Dianne soon garnered the credits and top grades to transfer to Pomona College, where she excelled and was inducted into Phi Beta Kappa, the honors society. After earning her bachelor's degree she enrolled in the master's program at Claremont Graduate School. Now with an advanced degree in information sciences, she holds an administrative position in her chosen field at a San Diego-based corporation.

"Anyone who commits can do that," Dianne says of her college achievement. "Those of us who go to community colleges, our strength is in recognizing the talent and wisdom of those around us, from our professors to our fellow students."

Dianne says her background presented one set of challenges, but the biggest were those she created for herself.

"I didn't believe I was capable of earning straight A's, or being in an honors program," Dianne says. "I proved myself wrong, and I was never so happy to be wrong."