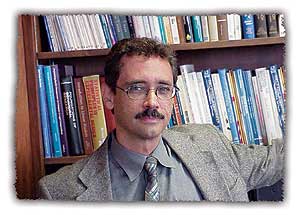 "It's healthy to be vocal. It's much more therapeutic to say what needs to be said."

Mopping classroom floors was hard work, but it put a shine on the aspirations of Ricardo Stanton-Salazar.

Ricardo was a school custodian while taking classes at City College, and says his experiences cleaning classrooms influenced him, as he was enamored with the setting, and harbored aspirations of teaching.

"There might have been a voice saying those dreams were illusions of grandeur," Ricardo says. "My instincts may have told me to make more rational decisions, but those same instincts brought me to this place today."

A tenured associate professor at the University of Southern California, Ricardo recently published his first book, Manufacturing Hope and Despair: The School and Kin Support Methods of U.S.-Mexican Youth, speaking to the issues of working-class youth, good students who remain mostly in the background, and have a difficult time accessing people and networks of information at the academic level.

"The book is really about both sides of the story, about how some young people are not able to make connections, and how circumstances are such that they deny the development of trusting relationships with teachers and counselors," Ricardo says.
Ricardo experienced some of that disconnection, attending City College for three semesters in the mid-70s, and finding powerful influences in a few of his professors, while at the same time struggling to connect.

"At the time I tended to be the youngest in class," he says. "I was attending classes with people who were much more mature than I was, and I remember thinking I wanted to be like them. This was about the time when I realized growing up was part of moving on in life."

Ricardo was able to connect in time, transferring to UCSD, then becoming a professor there and at UCLA before landing his position at USC, where he also recently became associate director for the new Center for American Studies and Ethnicity.

"Community college is a very important avenue for higher education," Ricardo says. "I know that it acted as a bridge for me."