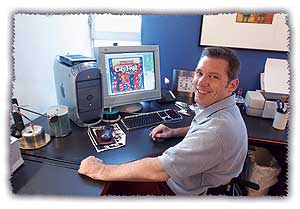 "In life we're dealt a hand, but how we play it is our choice."

A surfing accident in 1990 broke Rick Newlin's neck but not his spirit. This once-active athlete and artist admits that, given the situation he suddenly faced, self-pity might have taken over his life. Instead, now confined to a wheelchair but with an unharnessed imagination and work ethic, Rick went back to school.

"I decided I needed to go to college and learn something," Rick says. "I had a fine arts background, but because I had lost dexterity with my hands, I needed something else. Graphic design was right for me, and I enjoyed it immensely."

Rick was a star student in the graphics program at City College, and when he left he was advised he might have trouble finding work in the field because of his wheelchair.

"I didn't really need to worry about it, because I opened my own business," Rick says. "It was real tough to do since I had only just graduated from the program, but a couple of friends gave me some business contacts, and things have grown nicely."

Rick has a customer base of local, national and international clients, providing a variety of graphic design services. He's not too busy, though, to stay involved with City College as president of the Graphic Design Alumni Association, which holds fund-raisers to help the college's graphics program.

"The program has improved tremendously," Rick says. "It's nationally known."

Rick is involved with city beautification through public art projects, and also serves as a motivational speaker. He first gained experience while still in hospital rehabilitation, when he and some other injured people began a peer group program at Sharp Hospital, where former patients of the rehab program talk to newly injured patients.

"I tell them we were born in the first place, that means we were destined to be winners," Rick says. "I tell them that the rules are different now, and that's wonderful, because you get to make them up from here on."