Dear Board Members, Colleagues, and Friends:

I am writing about the state budget situation now because actions and decisions will occur at a very fast pace. I want to be sure that everyone is well informed and prepared for quick decisions. The San Diego Community College District is generally about 3.5% of the state budget for the California Community Colleges system, so one can extrapolate from projections at the system level what our overall local impact will be.

Last night, the California Senate resolved its budget proposal for FY 2020-21 in reaction to the Governor’s May Revision Budget. The Senate proposal vs. the May Revision proposal is provided at the end of my message.  The Assembly is currently working on its version.  Following the Assembly’s proposal, a conference committee will meet to resolve the differences between the two approaches.  The governor will then convene the “Big Five” legislative leaders and determine the budget for the coming year in accordance with the June 15 conference approval deadline for the July 1 Constitutional deadline for filing the budget.

In the meantime, there are still some significant “unknowns” affecting final budget determinations, such as whether there will be a second federal stimulus for the states and how much that will be, as well as the final revenue regarding property taxes, income taxes, corporate taxes, and sales taxes.  There will be a further assessment of the state’s revenue situation in August and, as a result, final (adopted) budgets for local districts will not be legally required until October.  As you can see, due to the enormous impact of the COVID-19 crisis, the entire state fiscal situation is in flux.

The Senate budget proposal is telling.  In essence, as you will see in the chart below, the Senate is not calling for budget cuts in all of the areas that the governor proposed in his May Revision.  Programs such as Strong Workforce, Adult Education, Student Equity and Achievement Program, part-time faculty support, and other key programs would not be cut, which is heartening.  Instead of many of the May Revision outright cuts proposed by the governor, the Senate is proposing using an additional deferred payment strategy instead of a budget cut strategy.  If you look at the line in the chart below, you will note that the May Revision calls for $331.9 million in apportionment deferrals for the California Community Colleges, while the Senate is proposing that the same amount of funding be deferred through a system of delayed payments of apportionment (the income based on FTES enrollment).  These deferrals could last for months at a time, which means that districts would have to draw down from their own resources (reserves) in order to make payroll and other expenses during the periods in which state payments are not received.  The Senate believes that a second federal stimulus package can then offset these deferrals.

I have conveyed that we are supportive of the Senate proposal and we are encouraging our Assembly representatives to follow suit in their plan.  As our Executive Vice Chancellor Bonnie Dowd points out, a deferral is a temporary reduction as opposed to a permanent reduction in apportionment funding, which is always preferred. Deferrals were used during the recent California Recession from which the community colleges, including the SDCCD, rebounded fairly quickly in 2012. However, at that time, the SDCCD had the advantage of having larger reserves from which to draw down, since the CalSTRS and CalPERS retirement systems had yet to introduce their enormous employer contribution increases, and also there was no catastrophic pandemic to address.

The Senate’s proposed deferral in 2019-20 would pose a one-month cash challenge in the current year for all districts.  However, Dr. Dowd believes that the SDCCD can weather this impact in the short term.  The Senate proposal also notes that potential continuing deferrals may be “triggered” in the amount of an additional $674.3 million in the coming year.  If this occurs, it will pose serious cash-flow challenges, which will require another strategy for the SDCCD, probably requiring external financing (called TRANs).  Our District has never had to do this before but, in my judgment, we need to have the capability both to have sufficient cash flow during the periods between deferred state apportionment payments and also to have sufficient funds to address whatever additional emergencies may develop if there is a resurgence of the COVID-19 pandemic.

In my opinion, it seems as though a second federal stimulus is likely to occur, which would make the Senate’s proposal attractive and practical.  However, at the same time, it is important for the SDCCD to continue to plan actively for the level of reduction we would need to achieve in the absence of this funding, about $20 million plus.  Our continuing hiring freeze (to bring down payroll and benefits costs through attrition rather than layoffs), the large reduction in class sections (with an emphasis on meeting student demand and increasing productivity), and other reductions (e.g., the elimination of the Military Education program, the consolidation of key positions, and other future strategies) will continue in order to ensure that we have a balanced budget and solvency.  The Board of Trustees, the Cabinet, the District Budget Planning and Development Council, and other groups are and will be grappling with the specifics of the budget.  However, this is such a fast-moving situation that I wanted to provide the overall framework immediately.

As I have said on several occasions, these are unprecedented times and the path ahead is uncharted.  However, I do have a more optimistic sense that the contours of the budget situation, while still harsh, are not beyond our ability to cope.  While adjusting to the fiscal negatives, the real effort is to ensure that the District, City, Mesa, and Miramar colleges, and Continuing Education are well supported to provide high-quality education for students, and that we are also positioned for future development and innovation, including potential enrollment growth in the fall.  As always, the Board of Trustees, the Cabinet, and I welcome your suggestions.  Thank you for your support, understanding, and patience.

Please see the chart below. 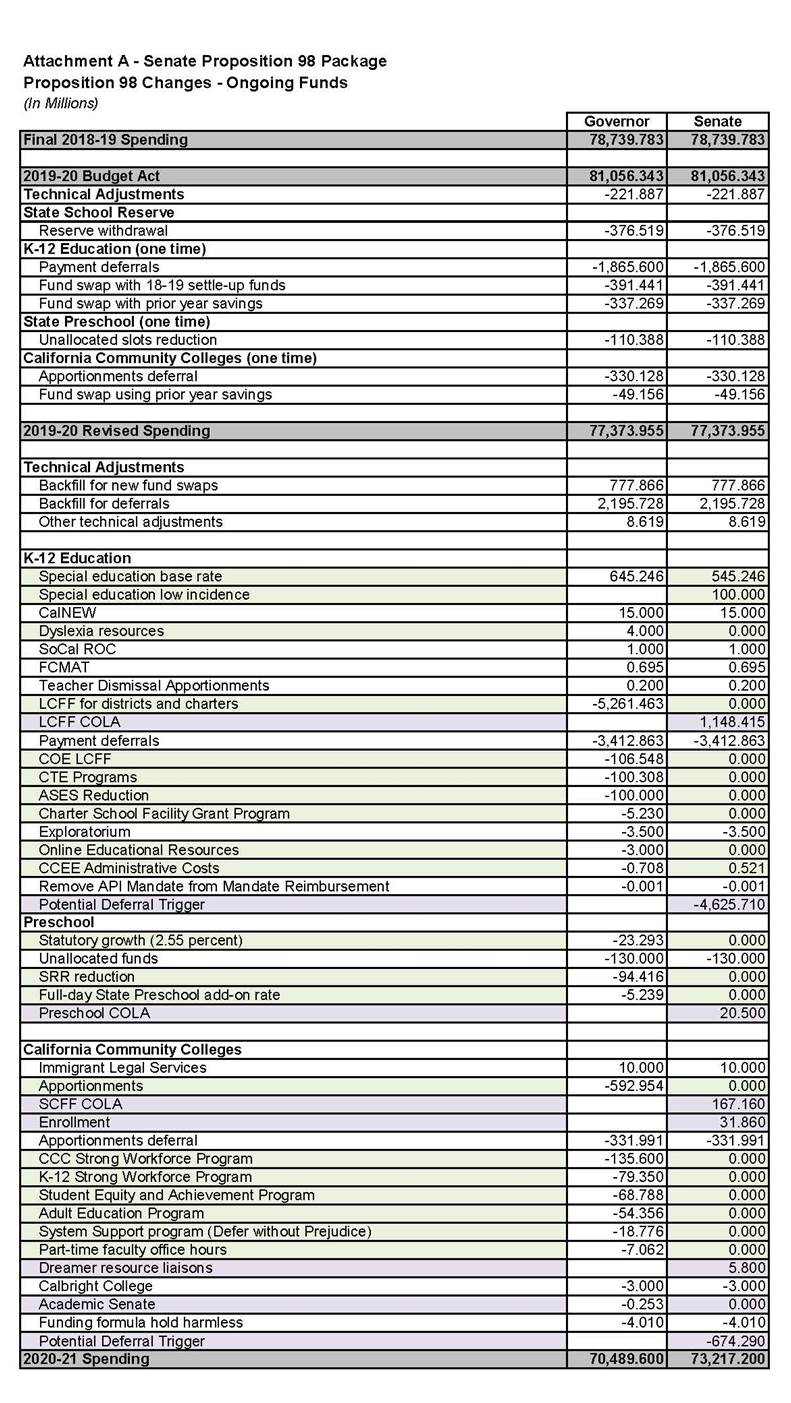 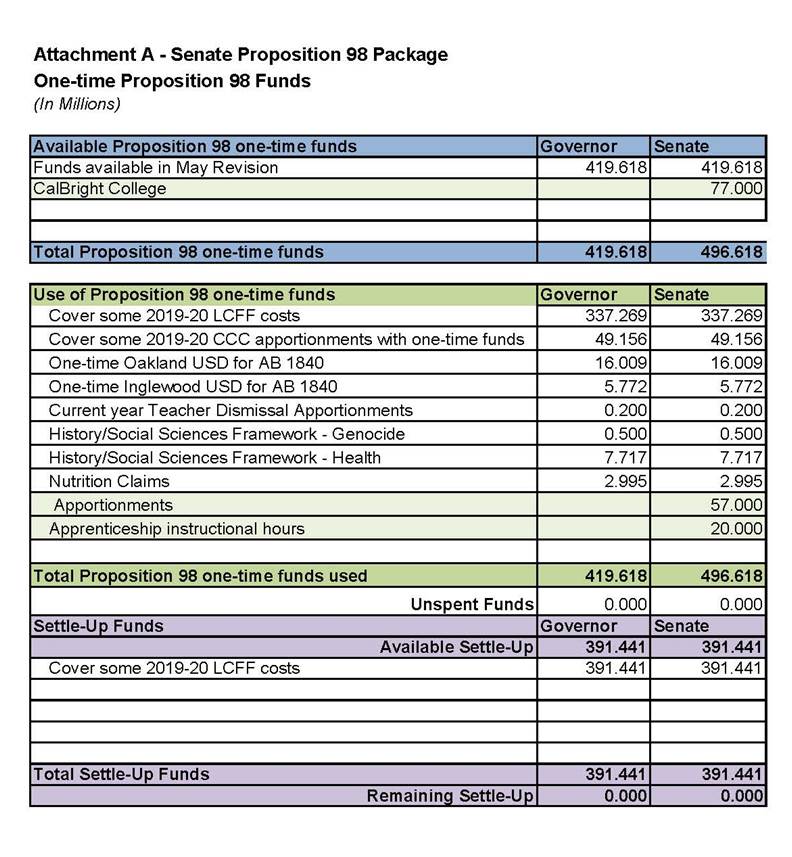